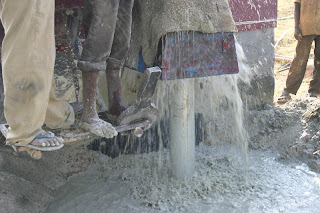 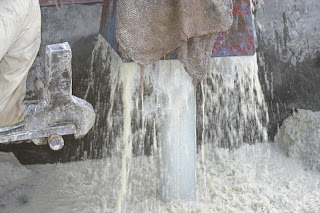 If you already know all about drilling a bore for water or have no interest in knowing, read no further. For others, please put up with the painful details!

The two massive trucks plodded on to my land. One was the actual vehicle with the drilling rig and the other was the support vehicle. It's amazing how efficient the large crew is once they have placed the truck in the right position where the water diviner had zeroed in on the spot where we should get water. Curiosity was on two fronts for me. One, to see how the heck this truck would be used to drill a few hundred feet into the earth, the other. to see if the water diviner was actually correct in predicting where we would find the critical aqua.

The drilling rig, is a humongous crane like device. The diesel motor for this is a behemoth and makes a din like a factory power generator. The support vehicle contains all the tools, including drill bits, drill rods, casing pipes and the like. Drill 'bit' is quite a misnomer as it requires two strong sturdy men to lift. Actually, pretty much every tool or accessory in this ensemble is XXXL in size and weight. The spanner, for example, is about the 3 feet long!

The first step - Get a drill bit, about 8" diameter to go down about 5 feet at the exact spot that has been pre-divined. The act of drilling kicks up enough dust to remind one of a sandstorm in the desert. The bit is then removed. By the way, in parallel to the first drilling, there's a group of people removing the casing pipes from the support vehicle and the cook starts arranging all the utensils, firing up the gas stove in preparation for lunch. There’s also a team taking out the drill rods from the support vehicle.

The next step involves three men carrying the first drill rod and attaching it to a holder in the crane. The moment the rod gets clasped into the holder, a hydraulic mechanism pulls the holder and the rod with it to about 20 feet in the air. The bottom end of the rod is then fixed to the drill bit and the drilling starts in earnest. Meanwhile, a rod holder next to the 'in-use' rod is fixed with the next rod in waiting. Once the first rod disappears into the earth 15 feet or so, the next rod automatically moves into place, attaches to the first rod and so the drilling continues. The combination of drilling and high hydraulic pressure results in the hole being dug at high speed ejecting out immense quantities of dirt at first and then sand as the drill bores deeper.

The drill hit solid rock at about 68 feet. The bit had to be changed at this point to drill through the rock. All the rods had to be now removed. The casing pipes were then inserted one by one for the entire depth of the hole until the start of the solid rock. Each pipe was then welded to the next and inserted into the hole one by one until about 4 feet of casing pipe was sticking out of the ground.

By this time, the activity on our land had attracted the nearby village folk. There were a lot of questions on how we got hold of this drilling company, who my cousin was and what we intended to do on this land interspersed with unsolicited advice and suggestions. Fun all the way!!

Once the casing pipes had been installed, a new drill bit was put into place and drilling once again started in earnest from 68 feet onwards. Drilling rock is obviously not a cake-walk and nothing like drilling through soil. A huge clatter of the drill, the rocks it hit against and the noise of the diesel motor ensued in wonderful cacophony.

The cook had delivered on his role by now; lunch was ready and the workers in turns had their fill of some deliciously smelling sambar, rice and vegetables. I was a bit astounded by the quantities of rice that each one ate, but then, with the amount of heavy lifting they do, they’re bound to have appetites like elephants.

We finally hit our first water source at 190'. Quite amazing actually, as the water diviner had told me that we would get water before 200'. It was great to see the water gushing out due to the pumping action. The soil and crushed stone spewing out of the hole first started to get a little wet and then a huge surge of water started. At first it was the color of cement but slowly changed color to become a little more muddy brown in appearance. Elation cannot describe how I felt. Without water, you’re pretty much dead in the water! My belief in the water diviner has also been further renewed! What a magician!!

We hit two more water sources between rocks at 290' 360' and two sources around 450'. The drill finally could go no further at 512 feet and that’s where we stopped. How do we know these measurements? Once the drilling is done, each rod is measured and counted when taking out. There were a total of 27 rods, each measuring around 19'.

After a few quick calculations with a V-Notch, the engineer/owner of the drilling company told us that we would be getting 16,200 liters/hour which is enough to supply water to 30-40 homes a month!

Stay tuned for more exciting (and upcoming) events at the farm.
at February 02, 2008 1 comment:

A wedding in Chennai

It's been a while since we had a massive wedding on the wife's side of the family. This one was especially important as it was the...